In parts of Africa where many people follow Islam, it is common for girls to be raped for being a Christian. One girl fell victim but refused to remain a victim. She was walking back from school in the country. Children walk long distances to attend school. It was around 7 pm. Young men stopped her and raped her for being a Christian. Her father is a pastor and many times they are targeted for being Christian in an Islamic culture. So ashamed, she didn’t report the rape. She wasn’t even able to identify her attackers but she was determined they would not take her whole life.Further retaliations on her and her family keeps us from showing her face. 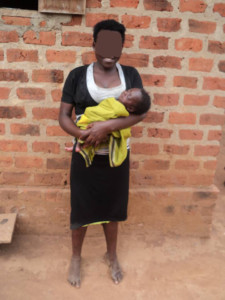 “I love my son very much”

Growing up with a father who is a pastor she knew life came from only God though rape is not of God. So when discovering she was pregnant after being gang raped there was no thought in her mind that she would give birth to her baby. In a culture that looks down on any unwed mother this 16 year old refused to be a victim. With her family’s support she gave birth to a beautiful son conceived in rape. She says “I love my son very much but I’m wondering how to tell him.” As with other mothers who give birth after rape she wants to protect her son from society’s cruelty.

That seems to be the greatest hurdle to overcome. More and more mothers with rape conceived children are sharing their story  hoping to see a change in society’s attitude. The misconception about children conceived in rape is a global problem. Focus should be on protecting females from rape in the first place. We must stop victimizing them over and over with emotional attacks on them and their children. One pregnant mom in the U.S. said, “A man stole my body and society wants to steal my baby.” Mothers love their children conceived in rape and want others to love them too. In fact many say the baby gave them a reason to continue to live after the rape.

CHOICES4LIFE believes that being pro-life goes beyond pregnancy. We offer support to moms with children conceived in rape for as long as they live. These mothers remain part of an elite group who fight stigma and misconception. Fighting almost on a daily basis, makes them true heroes who never give up. Plans for this brave young mom are to start college at the end of August and become more than an overcomer. She struggles with finances to do so but is a hard worker with a great vision. Her desire is to work in early childhood development.

For only $1200 USD a year ($600 a semester) she will be able to accomplish her goal in three years.  One of the greatest joys is helping others so they can help others.
If you’d like to show your support for this hero mom who chose her son’s life over her own life please donate here.  All monies will be used to pay her tuition unless otherwise stated. Please designate “Africa” on your donation.

This will be CHOICES4LIFE’s first international donation. Thank you.