I have heard this question asked many times. I would never have suggested abortion but I might have wondered this too before learning of my own conception and speaking to literally hundreds of people with rape conception stories. After learning I was conceived in rape by eight men I struggled for a short 15 hours as I pondered my own worth according to society. It wasn’t good. Even having a successful life with children of my own the stigma hit hard. But I was raised to know my Creator and He loved me to death! That saved me from dwelling on what society thinks and taking my own life. 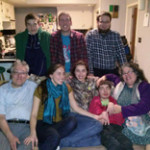 After speaking for the New Hampshire Right To Life years ago I was approached by a woman. Asking if she could introduce me to her son she led me a young man in a wheelchair. He was a handsome boy but completely unable to take care of himself. With little more than a contagious smile for communication this boy radiated with joy. His mom shared with me that he too had been conceived in rape. Too many believe this young man was worthless. He was an easy target for abortion while still in his mother’s womb. But to this mother he was her world. Not only for his mother but for his adopted father who told me “I can’t imagine our lives without him.” Yes, a man who loved his son by another man who attacked his wife when she was younger. So not only can a mother love a special needs child conceived in rape but so can a man.
Another woman I met adopted a rape conceived baby with special needs. The baby’s mom was thirteen and was pressured into aborting. The pain was too much for her under local anesthesia and the doctor told her mother “She’s making my job too difficult. Take her home and come back when you have the $300 for general anesthesia.” This girl was told no one would want her baby and so she consented to an abortion. But upon finding out that someone did want her baby she refused to return. Damage had been done to the baby and still parents wanted that child. It was the husband that suggested the adoption that was already in the heart of the mother. Children are wanted.

I believe there is a loving home for every child but there are obstacles that prevent their union. Children conceived in rape are not the only ones targeted for death when there are loving people ready and eager to adopt.

One such case was a FB plea for adoptive parents for a Downs Syndrome unborn baby that was at risk of being aborted because of the disabilities if the mom found no one to adopt. Hundreds of responses came pouring in. No child is unwanted. Unplanned by humans these children are not unplanned by God. What purpose do these children who seem to be capable of only ‘being needy’ bring to our society? I challenge anyone to talk to those who care for these special children and know the truth. These children make society a more patient, kind, less boastful, less envious, less self-seeking, more protective, more honoring place to live. They are God’s way of showing us the truth of our own frailty. He gives us the opportunity to be like Him for He is love. 1Cor 13:4-7 Love is patient, love is kind. It does not envy, it does not boast, it is not proud. 5 It does not dishonor others, it is not self-seeking, it is not easily angered, it keeps no record of wrongs. 6 Love does not delight in evil but rejoices with the truth. 7 It always protects, always trusts, always hopes, always perseveres.
The lie that no one will love these children is the basis used to destroy babies conceived in rape as well as “less than perfect” babies. It was the foundation of abortion in the U.S. in 1966 in Mississippi when laws were passed to allow the killing of the child conceived in rape.
For those negative people who would suggest that being born out of rape produces rapists and should be eliminated before such things happen I ask this question. What about all the war rapes in the world? There has to be “tainted” blood in every person over all these thousands of years. It is arrogant to say that someone else should die before having a chance at life by by one who has been given that opportunity.

As I’ve discovered over the last ten years of speaking publicly mothers do love their children conceived in rape. Yet society in all its advancement refuses to acknowledge them. Mothers consistently tell me that their child changed their lives in the best of ways. From the horror of rape came the gift of life literally. From motivating one mother to finish school and go to college to take care of her child to giving another young preteen the reasons to just live, these children have purpose. Society needs to stop playing bad fortune telling. No one knows the future of anyone born or unborn. If someone hasn’t committed any crime why punish them. Mothers don’t deserve the punishment of death of a child and certainly that child does not. The “what if” from the negative public cannot predict what the outcome of any birth will be. Not a few doctors fail miserably predicting the future. Many children “diagnosed” with some ailment in utero are born with absolutely nothing wrong with them. Others never get the chance.

A life that shows this perfectly is the life of Tim Tebow. He has nothing wrong with him. He’s guilty of nothing that would warrant killing him in his mother’s womb. Yet abortion was suggested strongly.

One couple was pressured to abort a baby that clearly had problems. The doctors said the baby wouldn’t last anytime outside the womb even if it lived through childbirth. Abortion is a horrible and disrespectful attack on parents as well as children. The couple refused and delivered a baby girl. They held her for the 5 hours she lived. Their lives were forever changed. Real life and yes, natural death makes us better humans.

I was raised by loving parents, loved by cousins, aunts, uncles, friends, husband, in-laws, children and step family. I am neither unloved nor unwanted. My birth mother loved me dearly as she fought to save my life. She loved me all my life even though we only had seven years together. She was with me for the first moments of my life and I was with her for her last moments. I was and still am loved. How we are conceived does not determine who we become nor does it determine who will love us.
Who we become is each individual’s choice.
There are many people who are rape conceived who live wonderful lives. Some know they are conceived that way and others were never told. Secrets have been told to me many times. Who could love a rape conceived person? Maybe you do and you don’t even know it!