Juda Myers 11.15.2013
Years ago there were less than a handful of people willing to come forward to say they were rape conceived or gave birth after rape. Today there are many more voices declaring life after rape. Women and children are realizing there is no shame in being pregnant by rape or being conceived in rape. For as long as time has existed it seems the victims have carried the shame that belongs to the perpetrator. I am happy to say that this is a new day when victims of rape will not stand for the lies. As the multitudes of people share their love of life even in cases of rape eyes are opening to truth. Victims are becoming victors and society is being called to justice. In a day when everyone wants equality even for what once was seen as perverse behavior it is time to give ear to a huge part of society that has been abused, neglected and even rejected. Prejudice against people because of skin color or heritage has become intolerable. Lives were lost in those battles for equality. But countless lives have been lost simply for the fact that a person was found in the womb of a woman after she was raped.Centuries have passed and the demand for the killing of the innocent rages on. Definitely this is the case of mistaken identity and being in the wrong place at the wrong time according to society.

But the majority of mothers know their baby was not a mistake. And they are speaking out. But not only are those mothers breaking their silence, but also the ones who succumbed to society’s lies that their baby was a curse. And the children are speaking for themselves too. Ever since I found out about my own conception I’ve desired to hear other stories. At first it was just to know I wasn’t alone. We all want to know we aren’t an isolated case even though we wish this on no one. So as I spoke out across the U.S. countless women can to me whispering “I had a child after being raped.” I would always ask, “Why are you whispering?”  They didn’t want anyone to know because of the prejudice against that child. So I would remind them, “Didn’t your mom teach you not to take things that didn’t belong to you? Drop the shame…it’s not yours or your child’s.”  But the hard reality is that mothers of rape conceived children are ridiculed, insulted, called liars if they choose to give birth but even more so if they choose to raise their child. I can’t tell you how many times I’ve heard stories of women being abandoned by families who refused to believe she was raped. I am most grateful to mothers and families who support a girl/woman after rape and those who are bold enough to speak truth through their own story.

If millions of war rapes have occurred across this planet for thousands of years then there are far more rape conceived thriving unknown to society. What if every mother and every child stood for the world to see just how many we are. I have a dream that one day we will stand by the thousands for the world to see us as we are, doctors, lawyers, professors, mayors, police officers, military, teachers, chemists, worship leaders, pastors, songwriters, authors, engineers, and every other profession.  My heart’s desire from the beginning has been to encourage every person to share their story. It will not only set them free but in time society will have to change their attitude simply because of our numbers. I love seeing women find boldness and refuse to take the abuse. One person was Connie Hong. Her life was much like many who were silenced and shamed. But now she is speaking out and taking her place in the battle to set others free.

Someone sent me a message saying she was the grandchild of someone conceived in rape. And that person’s offspring numbered in the 20’s. One life saved is not one in a million but one of millions I believe. My own mother saved not only my life but the lives of my two sons. Each of my sons has two sons and both have a child due next year. One life is worth more than just one life. What that one life will accomplish is known to no one. Ray Martinez is a great example. Given to the state after he was born it would be five years before Ray would be adopted. Most people who are for abortion in these cases would point out that no child deserves to be in an orphanage. They would look at Ray’s life from day one to the day before he was adopted and say he should have been killed instead. No they wouldn’t use that word but disguise it with the word abort. They would speculate that he would have been “better off” to be torn apart in his mother’s womb than to be in an orphanage. But that wasn’t the end of the story.  Ray isn’t silent on his gratitude to both his biological mother and his adoptive parents. His adoptive parents gave him a great life and when he had the choice to do what he wanted with that life it was amazing. I dare say that most people who claim that the rape conceived have “bad genes” have no knowledge of real people conceived in rape. He is not the “exception” but certainly exceptional. Ray is featured in our new documentary Pro Life Without Exceptions. Here’s a bit of his bio that he didn’t tell in the documentary.

Ray Martinez with his biological mother 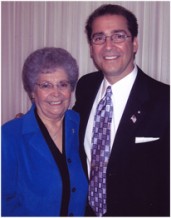 Ray be reached at 970-690-3686 or through email: raymartinez31@comcast.net
For those of you with stories don’t be silent any longer. Share your story. For those who thought you knew what a mother would feel if pregnant by rape and this website has changed your mind please let me know.

1 thought on “Conceived in Rape Silent No More”