You “coulda, shoulda, woulda” will run through your mind constantly. If only I had done this or not done that. Over and over you blame yourself for the evil done to you. But the reality of the matter is that no one has the “right” to harm you. There are ways to protect yourself but even if you’re standing naked in front of someone and you don’t consent they are responsible for their actions.

Ok so let’s say some decisions may not have been wise. But I reiterate – no one has the right to rape just because a woman is vulnerable. If that were correct then anytime a jewel thief sees an expensive piece of jewelry on someone’s hand they would have the “right” to steal it. Or leaving your car “unattended” in plain view of a car thief would make it the owner’s fault for having a car someone wanted to steal. Now if those scenarios are easy to understand and see that the perpetrator was guilty of a crime why is it so difficult for society to see rape as a crime period? Sadly even law enforcement and families can blame victims. They should instead understand people make mistakes or they can be in the wrong place at the wrong time.  I’ve heard the most ridiculous statements. A mother of a nine year said the daughter was trying to steal her husband and blamed the little girl for the actions of an adult criminal. That young girl grew up to continue the dialogue in her own mind that she was to blame.  This has to stop.

I agree with the bible 1 Corinthians 15:33 Do not be misled: “Bad company corrupts good character.” My word of advice is to stay from drinking, drugs and people who do those things.  But if you make a mistake remember humans do make mistakes. What makes us better people is to rise above our mistakes and go forward.  We love great stories of people who were abused for years and not only overcame but are leading others to freedom also. One of my own favorite heroes and personal friend Peter Loth is one who endured pain and abuse beyond our imagination. He was born in a Polish Nazi concentration camp. The perpetrators told him it was his fault that he was a German Jew. How is that his fault? In his book, Peace by Piece he shares years of abuse but more than that he shares what Christ did for him to set him free. Now he teaches forgiveness and reconciles even the Jews with Nazi descendants. Those Nazi descendants asked for forgiveness for their fathers and grandparents. Impossible? Not with the God of the bible.

I tell victims that evil stole a moment of your life but it does not have to steal your whole life. Blaming yourself and punishing yourself with cutting, drugs, drinking, promiscuous behavior and bad relationships is working with evil to destroy you.  Stop thinking you’re to blame and stop punishing yourself.

If you are pregnant by rape that baby – YOUR baby – is NOT your punishment but a gift from God.  Please don’t punish your baby for something he/she did not do. How we think determines what we do. If you think your baby is a curse you’ll want to kill it. But if you see that baby just like yourself not deserving death then you will give that baby everything you need – LIFE.

The rape was NOT your fault. But if you consent to an abortion knowing this is a human life that will be your fault. (let me say that many women who had abortions were lied to and acted upon lies) But know the truth and it will set you free. The truth is that your baby is YOUR baby not the rapist. God gave YOU the baby. The best gift a person can be given is life. God doesn’t stop evil.  I have no idea why he allows it but He alone made the universe and His thoughts are not mine. But what I know is that he does bring peace and joy and gifts to those who are suffering.  He knows personal suffering at the hands of humans. The best gift God could give is life created in His image.  A baby is the most innocent image He can present.

It can’t be a man that produces a baby because if that were so every woman who wanted a baby could have one and those who didn’t want one wouldn’t become pregnant. Please know that pregnancy IS a baby.  Our entire DNA is there at the moment of fertilization as is proven by scientific evidence as confirmed by Jerome Lejuene and many other geneticists and scientists. 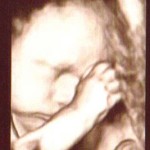 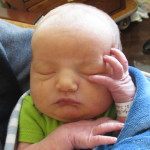 On the left we see a baby in his mother’s womb and the next picture is him outside the womb. He is the same person. We don’t look the same at fertilization as we do now but neither do we look the same as we did at three years old.

Don’t let evil own real estate in your head.  That kind of behavior must stop. Look in the mirror and say “What that guy did is NOT my fault any more than it’s my fault that thieves steal cars. I will not stay a victim.”

Know that being raped was NOT your fault! From there you will be able to think correct thoughts.