$0.00 Cart
Facebook
Menu
Back in October we celebrated a beautiful young woman’s being crowned homecoming queen for  Auburn University. 22-year-old Molly Anne Dutton shared that she was conceived in rape. Her faith keeps her strong.

Another beautiful face appears before the world and who knew? This beauty was conceived after rape. Valerie Gatto was crowned Miss Pennsylvania for her talent and beauty. No one was asking how she was conceived because truly it isn’t important how we are conceived but how we live our lives. Recent comments by a Bishop calling people conceived in rape “demon seeds” need to be eradicated. This young woman is no different from any other girl that stood on that stage except for the fact that she excelled and was chosen to represent her state. 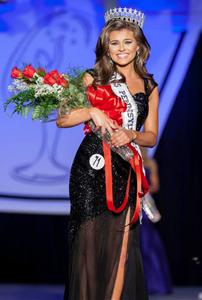 I love how she is unashamed to say that she was conceived in rape because she hopes to help others. She knew that it wasn’t to be talked about when she was young but now she is able to boldly put aside that stigma and hold her head high. The common denominator in all of the people I’ve spoken with has been their faith in God that has kept them feeling confident that they are here on purpose.  Of those I’ve spoken with two didn’t have a relationship with God and  didn’t seem to not know their value. They were greatly affected by what society thinks of them.

From her recent interview with Valerie Gatto TribLive:
Benz says: Her mother was raped at knife-point and managed to escape her attacker, but soon realized she was pregnant with his child. Keeping the pregnancy a secret, she intended on giving the baby up for adoption. Unyielding support from family members and a strong belief that God doesn’t give you more than you can handle changed her mind.

Her mother’s decision to turn a negative into a positive resonated deeply in Valerie’s life. Growing up, her participation in church and the Girl Scouts reinforced the importance of giving back.

Some of Benz questions with Gatto’s answers:

Question: What inspired you to share the story of your mother’s sexual assault?

Answer: I knew, at a young age, it wasn’t something that should be shared with my peers in elementary school. But I knew it was a topic that needed to have light shed on it. And I live my life not thinking of it as something negative, but looking at how to turn a negative into a positive. … A lot of people could benefit from this type of story — not just young women about how to protect themselves and how to prevent he crimes. It’s a story that could inspire a lot of people and, if I stay a strong person, I can inspire many other people. So, I don’t mind being an advocate for something like this. There’s not that many role models for young women out there today that are actually positive and uplifting, and that’s why I got into pageantry.

Q: You found out about the assault as a young child. How were you able to reconcile with that?

A: The version that was told to me when I was little — it wasn’t everything that I know today. The version that was given to me was definitely something for my level, and it was a lot to handle. But I also still believe, with my faith and going to church and having a church family and a close support system, that I didn’t really let it affect me too much. I don’t know if he’s still out there; I don’t know if he still exists.

Whenever my mom managed to get away, he was going to murder her, but there was just this bright flash of light, and he got scared and didn’t want any onlookers to see her and what he was doing to her. So, that light gave my mom the opportunity to run away and escape — and if that bright light didn’t appear, she would have been murdered. I like to think of that light as my mother’s and (my) guardian angel. It was always turning a negative into a positive. That’s why I don’t think I let it affect me at a young age. She always would tell me I was her light — I am the light to illuminate the darkness for all to see, and I look at it from that moment of conception, there has been that light associated with darkness, and that’s what I hope to do with Miss Pennsylvania USA 2014.”

My favorite answer of Gatto’s was:
“It really dwells with religion, and my spirituality and Christianity, why I don’t let it define me. I knew God put me here for a purpose, and he’s the reason my mother and I were saved. I want to do him proud and my family proud, and, if I did just sit there and think, “Why did this happen?” or “Does my father know I exist?” and be scared and let the fear of the unknown stop me, I wouldn’t be living my life. He put me here to do great things, and I’m not going to let that stop me.” 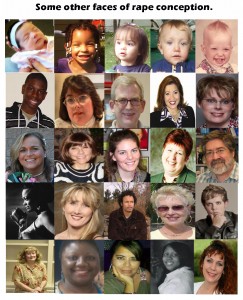 The people in this picture represent a chemist, pastor, international speaker/trainer, pastor’s wife, doctor, piano teacher,worship leader, professor, entertainer, lawyer, band leader, wife,mother, father, student, singer/songwriter, author and speaker. So we are everywhere in society contributing as any other human would.

As more and more people become bold enough to speak out maybe there will come a day when the rape conceived will be treated with respect and the rapists will be the ones punished.