Iva, now 16, didn’t want anyone to know what happened. Fear was ever present. She is sharing her story publicly for the first time.

This innocent 15 year old simply wanted to sit in the park sketching trees on a beautiful sunny day at the end of June 2013. Normally she wouldn’t have gone alone but that day her mom said yes.It was broad daylight. It just didn’t seem dangerous. Little did she know she would not be alone that day. “The man’s voice still rings in my head to this day of him screaming at me as I ran away,saying he would come after me if I told anyone,” she said. He stole her innocence that day. So terrified, Iva told no one and just didn’t want to come out of her room for months. “A month or so after it happened, I started to notice I wasn’t having my menstrual cycle. I was so nauseous whenever I ate anything in the mornings… so out of curiosity, I got on Google and typed in, Pregnancy Symptoms. As I read down the list, I checked off almost all of the symptoms that I had. And sure enough, I was pregnant.”

One of the biggest fears for females who are raped is what others will think, Iva was no different. “I was terrified,” she said, ” Mostly terrified that my parents would’ve been disappointed in me, because all of my life they said, ‘Don’t get pregnant before you get married.’ So I just kept going with my life.”  Iva kept thinking she wanted an abortion but knew there was no way she could do that without her parents finding out. She went on with school and her life as normal but she says, “I just was not normal.”  Telling no one she continued to keep her secret even after feeling her baby move. That was a turning point for Iva. No longer did she want to abort that baby. This baby belonged to her! “But once I felt the baby move in my tummy, I knew i wasn’t going to get an abortion, I was going to keep my baby. So to keep hiding it, I wore baggy shirts all the time.” She didn’t go to the doctor during this time and took no prenatal vitamins. That may seem shocking but many teens will do what they must to hide their pregnancy for fear they will be blamed or worse harmed or killed.

Though Iva wore baggy clothes her walk could not be disguised. “My friends didn’t even find out I was pregnant until I was 8 months. All because my friend made the comment, ” You waddle when you walk”. And I responded, “8 Month pregnant women tend to waddle.” Well, over a short period of time, everyone found out, “Hey Iva is pregnant!” Iva’s secret was out. As the word circulated about Iva not having prenatal care, a friend told a teacher and that teacher told her counselor. With everyone knowing at her school it wasn’t long before Iva had to face her parents. “I was afraid, and shocked. My parents WELCOMED and LOVED the baby that was in my tummy at the time. They supported me in every way possible.”(All caps written by Iva) Indeed blessed to have such loving parents Iva is very grateful to them. It’s not always the case that girls find support from parents. Many girls find their mothers are the ones pushing them to abort. In cases of incest abortion is used as a cover up.

Because Iva had not gotten prenatal care she was immediately taken to the doctor and discovered her blood pressure was high. School nurses were instructed to check her blood pressure and less than a week after seeing the doctor she was in the hospital for very high blood pressure. To her surprise as well as everyone else, Iva was in labor and dilated 1cm. After having her first sonogram that day she discovered she was having a daughter. Her joy bounced back to terror again. “I was terrified,” Iva said with great emphasis. “I wasn’t ready to have her yet! But, once I did have her that Sunday, March 9th, 2014., I was thrilled. I didn’t know what to feel at first. I didn’t know what to think also. All I knew is that she was here and that she was mine. And God was a huge part in this too. She came out nice and healthy. He had his hand on that baby. And he still does.”

Iva isn’t alone in this discovery. Once a woman realizes that this is her child her whole attitude changes. Perspective is everything. When a woman or girl sees this truth and does not believe the prejudice society pushes she is able to enjoy the blessing of life. There are great people who have suffered enormously but are able to see that their lives are not determined by a moment in time but instead by their will to live to the fullest. What greater joy than to hold a precious new baby in your arms. Too many women are being cheated out of that beautiful experience because they have believed lies. One girl was told that she wouldn’t have a life if she carried that “rape baby” to term.  But the truth is life does go on. That girl who ignored what people told her has been empowered. Mothers of live babies are far more empowered and suffer no regret.

“This experience for me was a hard one. But it turned out amazing in the end. My mom and I still joke about it [how fast it went]! So if I could say anything to a woman who just found out that she’s pregnant due to a rape, I would say “Keep that baby, because its not a reminder of what happened, its not a monster, its a squishy little ball of love and you.” Its worth it.”

Iva did something that is also quite shocking in that she reported the crime to police. When her parents found out that Iva had conceived in rape they helped her with reporting it to police. As of right now the man has not been found. But Iva is one very brave teen. Most are too afraid to tell or too ashamed even as older adults. Many times police are not supportive or sympathetic trying to insinuate the girl “wanted it” or somehow did something to give the rapist the “right” to rape the girl or woman. Asking questions like “what were you wearing” leave a victim victimized again. But the police that took Iva’s report were very respectful.

Iva is proud of her daughter and is excited to be her mother. Life isn’t always easy but the right choices will never come with regret. 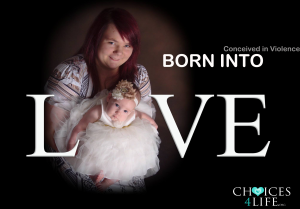 If you are pregnant after rape there is hope and there is help. Your life will not end. CHOICES4LIFE has helped Iva and others like her financially, emotionally and physically. Iva found support and camaraderie with Kali who also was raped and had given birth to a beautiful boy a year earlier. You are never alone. There are literally hundreds who completely understand and are ready to stand beside you. If you’re raising a child after rape conception CHOICES4LIFE is here for you too. No longer must you carry shame that is not your own. Many more stories available at www.choices4life.org
Contact

7 thoughts on “Pregnant After Rape, What This Teen Did May Shock You”