She was my hardest case thus far determined to abort her rape conceived baby. By mistake this fifteen year old went to a pregnancy center looking for an abortion. They called me. She wanted a life, to stay in school to go into the military and this child would only get in the way. She regurgitated every lie society had told her. For an hour she looked straight ahead away from me seemingly void of any emotion. We had seen the sonogram but she was unaffected. She was told she was having a son. I told her about my own hero mom and how I love my life. I told her about other young women her age with more odds against them who gave birth and were successfully living the life they wanted. NOTHING. No reaction what so ever! She was numb unable to even feel because of the shock.

I begged and pleaded in a most unprofessional way identifying with that baby she was carrying and thinking back on what my mom had told me. This was personal. It is said that babies in the womb can hear at 16 weeks and can even start to learn language. So what I heard was my grandmother and my mother’s doctor telling my mother it was best to abort me.  BabyCenter.com says “The voices the fetus hears in utero are impressed onto his memory, so that, for instance, he recognizes his mother’s voice soon after birth.”  So I imagine there is some residue in my own brain of that discussion pertaining to their choice of life or death for me. I am grateful beyond words for my mother’s strength to save my life.

So after begging and pleading with no response my heart broke and I began to cry. Another professional “no no” but I couldn’t help it. We walked through the pregnancy center’s room filled with maternity and baby things. Still no change in this girl who was walking in her trauma. A thought came to my mind that she wanted to be a soldier and I should ask her if she wanted to save people. Her eyes lit up and she was full of life. “YES!” She immediately replied. Then I told her this baby was her first assignment and no one could save this baby but her. By the look on her face she was really thinking. Then she looked at me, shook her head and said yes she would save this baby.

The hour was not up before she had named her baby and started making plans for him. Her whole attitude changed 180 degrees when she made her decision to give life to her son. Life returned to her! Too many times people dwell on the negative and are cheated out of the joy. The overwhelming lies that she couldn’t do this and that her life would be over had vanished and she was thrilled to be a mother! Everything depends on how we perceive a problem. There is always a solution that is better than abortion. And this 15 year old will never have to feel the regret of destroying her baby. She IS that hero we all want to be!

The whole time her mother was praying for this baby… her grandson..to have a chance at life. She longed for the joy of holding him and knowing him. She had miscarried a baby of her own and knew the pain of her loss. She wanted to spare her daughter an even more horrible pain. Daughter and mom walked out of the center with smiles on their face looking forward to life literally.

I’m reminded of another teen 13 years old who was told that she would die because she was too young to carry a child. “No one would want a biracial rape conceived baby,” they said. Her abortion began but the pain was so excruciating the doctor stopped, saying she was making his job too difficult. He told her mother to bring her back when she could afford sedation. But the girl learned there was someone who very much “wanted” to love that baby. Upon learning that someone could and would love her baby this 13 year old refused to return to complete the abortion. Because of the attempt to end this baby’s life, Jaylyn was left with permanent physical and mental challenges. But even then Julia and Andy couldn’t love their adopted daughter any less. The myth that somehow there is no one on earth that wants a baby for whatever reason given is simply a lie. Someone will love that child. Jaylyn, biracial, special needs, rape conceived and birthed by a 13 year old is loved no differently than their other biological children. Julia and Andy would literally die for this precious child of theirs. Sometimes seeing depends on the condition of one’s heart. Attitude and perception can be a matter of life and death. Hear Julia and Andy’s story in the documentary Pro Life Without Exception.

If you’d like to show your support for the 15 year old hero mom please specify your donation for K. She needs everything for a newborn.She may one day be serving in the U.S. military protecting all of us. You can also mail items designated for K. to CHOICES4LIFE P.O.Box 14496 Humble, TX 77347 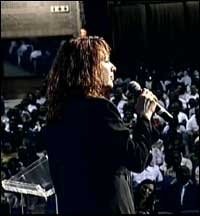 Juda Myers may be unconventional but is bringing life to babies and their mothers.
As speaker, singer/songwriter and author she uses her talents to encourage, educate and equip people with truth.

7 thoughts on “Teen Pregnant After Rape Does a 180”