Sure we can forgive someone cutting us off on the road or taking the last cookie in the jar. But there are a few things that most people will say is unforgivable.If you’ve ever been deeply hurt you know forgiveness may be difficult.  Forgiveness is a controversial topic as much as incest is. And when they are combined it leaves some thinking either it was all a lie or  in awe of God truly working personally in those who can forgive. Forgiveness of that kind has to take a miracle.

Rowena’s mother’s father is her father. That would be hard enough but her father was also her attacker. Many of you would say that you wouldn’t ever forgive. But those of us who know the benefits of forgiveness wouldn’t have it any other way. Forgiveness is our freedom. Forgiveness does not say what was done is okay. Forgiveness says we will let God and in some cases police handle it but we refuse to carry the hatred.

Rowena shows strength that comes with knowing and living for Christ. Sometimes we may not want to do things but when we are obedient to the Lord there is great reward. Some may focus on the whys but Rowena has chosen to focus on the “who” in all that God is.

I hope after reading her story you will be encouraged to know the God who empowers us to forgive and live joyous lives and overcome anything that comes against us. And if you know the God of Abraham, Isaac and Jacob then trust Him. Don’t judge Him by some people who say they know Him and do things that are far from Him. He will never lie and His word is always trustworthy. You too can call out to Him to help you forgive also. 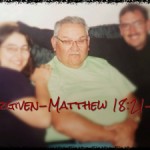 October 6, 1996
Dear Father,
I am writing you this letter to express to you my thoughts and feelings. First off, I want you to know that the days of denying who you are to me are over. After mom and I moved here, she told me the truth about who you really are. She told me that you are my biological father, not just my daddy. She told me that you forced her to have sex and got her pregnant with me. I was 10 years old. Do you realize the burden I have carried for these last 8 years?
From that time, I have had to deal with the hard facts. When mom married Tomas, I thought that my problem was solved. He could be my dad, and you could be my grandfather. I wanted to see you as less than a person. I hated you for making me a bastard, an odd ball! Everyone else’s dad was normal but not mine. That reality hurt deeply. Because I wanted a “daddy” so much, I took Tomas as my “daddy”. When we left him, I once again was left without a father figure. This time, I couldn’t deny who you were.
Even then, I hated you , though I wouldn’t admit it. I wanted to believe that you were dead! I was angry because not only did you sexually abuse my mama and get her pregnant , but after I was born, you sexually abused me too. Sometimes the memories and realization hit me all over again, when I think of relatives like my half brothers and sisters on your side that should ONLY be my uncles and aunts, or when I think of my cousins and how they are really half nieces and nephew. Your actions brought so much confusion and pain in my life. I still have to deal with those things. Do you?
What I want to tell you is that I have prayed that my Jesus (the Jesus Christ of the Bible) would give me His eyes to see your heart. I haven’t forgotten my past (I don’t think I could if I wanted to), but I can now tell you from the depths of my heart that I FORGIVE YOU! Not because of anything you did or didn’t do, but because Jesus directed my in His word to. My unforgiveness is binding you and me. In Matthew 16:19, Jesus said that whatever I bound on earth will be bound in heaven, and whatever I loose on earth will be loose in heaven. His word also says in Matthew 6:14-15, “For if you forgive others their trespasses, your heavenly Father will also forgive you, but if you do not forgive others their trespasses, neither will your Father forgive your trespasses.”
In His word, Christ has commanded me to forgive you and Ruben Garza, I have! I release you in Jesus precious name. I want you to know that I am not ashamed to be a Garza, but not because it’s wonderful, but solely since I know that my name is Rowena Abigail, daughter of God Most High!
When I look at you, I know longer see a dirty old pervert. Instead I see a man who doesn’t know God’s love, grace and true forgiveness. you see, if you did, you wouldn’t have to be afraid of being found out anymore. You would come to complete repentance and take whatever consequences befall you.
I am no longer worried or afraid of what people might think or do to me for the sins I have committed because I walk in repentance and the forgiveness that Jesus promises in
1 John 1:9, “If we confess our sins, he is faithful and just to forgive our sins and to cleanse us from all unrighteousness.” Dad, I want you to know this incredible freedom. I pray that before you die, you will truly experience true freedom from your sin. Jesus has so much to give you, so please take it!
Ruben Garza, I, Rowena, Daughter of the Most Wonderful Daddy (God the Father) in the world, forgive you for the pain and hurt that your sexual perversion and assault on my mom and me, cause me. Because of Jesus Christ, I can say I love you.

Juda Myers shares step by step instructions on how to forgive any offense in her book, Hostile Conception Living With Purpose.