Sandy isn’t the type to accept being called a hero but she is. When everything seemed against her, she fought as any hero would to save the life of an innocent child… her baby.
The bible tells us in Isaiah 61:3 To appoint unto them that mourn in Zion, to give unto them beauty for ashes, the oil of joy for mourning, the garment of praise for the spirit of heaviness; that they might be called trees of righteousness, the planting of the LORD, that he might be glorified.

It’s so difficult for us to process trauma. Why did it happen? Where was God? But those who have been touched by Him in their mourning only need ask Who. Because WHO HE is matters more than why. We cannot comprehend why God allows people to have free will when it hurts the innocent. But neither can we understand the joy unspeakable and the freedom we experience when we turn to the “WHO” that heals us. Sandy is among thousands and probably millions, who have experienced unexplainable trauma and found unspeakable joy that the world will never be able to grasp. But we are praying that many will simply listen and believe what mothers know so that our society will be a place free from abuse after rape pregnancies. We want rape to end but until that happens let’s honor those women who love their babies even after rape conception. When someone says they are grateful for their precious baby conceived after rape please believe them and share in their joy. Love wins. Life wins.

Sandy shares her feelings after rape pregnancy in own words:
“In July of 1972 I was raped. A couple of months later I discovered I was pregnant. I told my mom and she was not very happy with the news. My father died when I was a teenager. Mom told me I had 3 weeks to get out of the house.
My Aunt heard of the news and since this was before Roe V. Wade she told me she could arrange for me to have an illegal abortion. I told her no way.I found my way to a home for unwed mothers run by a group of Catholic sisters.
I want to share the path to healing in this testimony. When I learned I was pregnant I was scared. Yet I knew an illegal abortion was out of the question. There was life inside of me. The healing began at the home where I stayed throughout my pregnancy. I was treated with love and grace. I was given counsel and decided to place my baby for adoption. I do not say give my baby up. I did not reject this baby. I knew I could not care for this child. I had no support, no place to live and no job. I knew that there were families that could not have children, who want to adopt-so this child that I was carrying was to become a gift to a couple who dealt with infertility.
Carrying this child and choosing to place this baby for adoption was the beginning of my healing. Rape was a horrible experience; yet to give birth to a healthy baby and to give a gift to others was a good experience. I believe in God and that God is a loving God. My only request as my baby was placed was that this child be placed in a strong Christian home. On April 16, 1973 I gave birth to a healthy baby girl. Birth and conception are miracles, in spite of the circumstances surrounding that conception and birth. 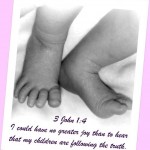 Many years later I was able to meet my birth daughter and her parents. God did indeed keep her in the palm of his hands. Her parents are loving Christians.
The other journey I needed to complete in order to heal from rape was find a Christian counselor to help me deal with the feelings and beliefs about myself that developed. I discovered that even though I was raped, I am still a daughter of my Heavenly Father and I have no reason to feel shame. I also then needed to forgive the person who raped me. This was relatively easy because I did not know him—not even his name. He was a stranger and I think it is probably easier to forgive a stranger—yet I believe actively forgiving the rapist was crucial in my healing.
I now work in a pregnancy center. I share my story when I feel it is OK to do so. I do not want to sensationalize rape, but I want to share that God heals. It takes time and it is a journey. “