48 years later- a rape conceived child celebrated her Valentine birthday with her mother. In 1957 after being attacked by eight men and then 36 hours of labor Ann Phillips gave birth to a healthy baby girl on Valentine’s Day. Bruised from the forceps delivery this baby girl was still the most beautiful gift in Ann’s eyes and heart. But for her baby’s protection she placed her for adoption. Ann wasn’t even supposed to see her baby girl but a kind older woman brought the baby to Ann twice a day for two weeks. 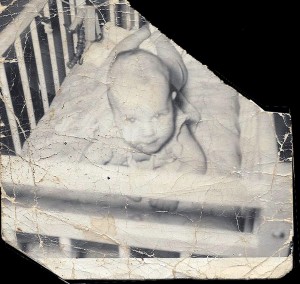 Then three months later Ann received a picture of her baby with a note saying she should have no worries that the baby was placed in a great home. Ann began praying for the day they would meet again. She told everyone she met about the precious gift from God that she had to place for adoption. Yes,a gift from God. She knew that God had reached down and touched her and placed that child in her womb. She knew those eight men who attacked her could never give her this precious baby.

December 7, 2005, forty eight years later still holding that picture in her hand Ann had her prayers answered.Her daughter was in her arms once again. The joy was unspeakable. They laughed. They cried. They praised God. And the people in the nursing home stood in amazement. Ann had told everyone in the nursing home and anyone who would listen about the baby she placed for adoption. They were seeing her prayers answered right before their eyes. They witnessed a mother’s love that endured so much yet chose to remember the blessing instead of the curse. She didn’t dwell on the fact that her baby was targeted for death or how the child was conceived. Ann could only think of how much she loved her daughter and longed for the day they would be together again.

But she did struggle at times, not with the trauma of being assaulted but with the trauma brought about from society and their misconceptions about her baby’s conception. Her baby born on Valentine’s Day was targeted for death. Even Ann’s own mother couldn’t understand what Ann knew about this child of hers. The world says that a baby born after assault shouldn’t be allowed to live because she would be “reminded of the rape.” Mothers who choose life for their child know the peace in giving life rather than taking it. Like Ann they see only their innocent baby.  Today we hear public demands for the death of such children. Donald Trump says “we have to have it”, Chris Christie said, “I believe that they do not have to deliver that child if they believe that is an act of self defense by terminating that pregnancy.” Even people who say they are defending lives of preborn choose the rape conceived as sacrifice.  Marjorie Dannenfelser of Susan B. Anthony List called allowing the rape conceived to be aborted “the sweet spot” to pass legislation. Billy Graham says “It is acceptable in cases of rape, incest and the life of the mother” to abort. The world is greatly deceived. 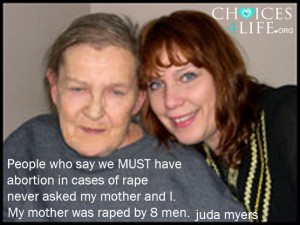 Ann and her daughter, Juda Myers celebrated, yes celebrated, her Valentine’s birthday after being separated for 48 years. Their love was a purely misunderstood love. They had seven years of celebrating until Ann passed away December 27, 2012. Each year Juda would fly to an Alabama nursing home to celebrate her birthday and hail her mother as her lifesaving hero. The two spent many times together during those years. Most people just can’t understand. There is a belief that children conceived in rape shouldn’t celebrate or even have a birthday. Many people think aborting a baby will erase the memory of the assault but in fact it only makes memories of the assault and the abortion tormenting. Ann’s battle with the world was overcome by the love she felt for her daughter. Today that daughter has two married sons and six grandchildren because of the life choice her mother made. Ann said her first born daughter was one of the greatest blessings from God. Of course mothers aren’t saying the assault was a gift but there have been mothers like Anna Richey who say they would go through it all again to have the precious life of her daughter. She would die for her daughter. That is a true mother’s heart, unselfish even unto death.

As the world celebrates love on Valentines Day we remember another love that gave it all. Christ came into the world as a sacrifice for all. He showed His love while the world didn’t even know Him. While we were sinners He died for all of us. Love is not a noun but a verb. Ann loved her daughter and gave life. Proverbs 16:25 says “There is a way that seems right to a person but in the end leads to death.” That’s what’s happening in the United States. Killing a rape conceived baby is never the solution to “saving lives.” I hope the many stories of mothers who love their rape conceived children will penetrate the hearts of those leading so that all will be able to celebrate birthdays.

To all the mothers who showed the ultimate love for a child conceived in rape I wish you a very love filled time! Celebrate Valentine’s Day and every day for the choice you made. You are the perfect example of love.