Rape/incest is the foundational lie for abortion. The Austin Chronicle adds to the many who believe rape is the foundation for abortion.  Mary Tuma, artist as well as the author of the article bemoans the loss of abortion rights. Her artist statement “In most of these works there is evidence of loss—an allusion to the passing of time; a vacant space within a form once occupied;” How ironic for her to use such imagery as “evidence of loss‘ (mothers who abort have lots of evidence of loss), “an illusion of passing of time” (time cannot erase the killing of one’s own baby) and “a vacant space within a form once occupied.” Wow that last one really spoke loudly. That poor woman who fell for the lies of abortion is now that “form once occupied” with that “vacant space” that haunts her entire life. In Tuma’s article, Roe‘s End? Supreme Court case will decide the future of abortion access in the U.S., she takes advantage of the age old prejudice against the rape conceived. She tells the story of a woman raped.

I’ve found that people speaking like this do not speak for eliminating themselves. Au contraire,the only reason for killing another human being whether you’re in a gang or acting alone is for selfish gain. 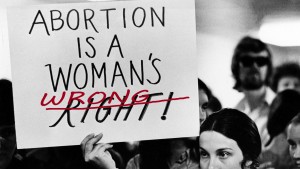 Mary Tuma goes on to say, “The choice became clear for the 35-year-old Texas woman, still hoping to establish her career and prioritize her own goals. She decided to terminate her pregnancy…”  Career and her goals prioritized over the life of her innocent baby. I’m sure people like Tuma would tell this woman she is making the right choice. It’s all about her life not anyone else right? The police officer I spoke of said she was told abortion was the best thing to go on with her life. Lies that can never bring back the life of her baby. Nor can it bring back that officer’s life. She left her profession… yea the one that everyone focused on. She hated herself for what she did and is today self inflicting pain and suffering on her body as punishment. She can’t forgive herself after many many years.

Why is there so much hatred for the rape conceived but not the rapist? Women aren’t demanding Planned Parenthood abort the real problem. Why is it a woman is hated for loving her rape conceived child? Why is she hears the first words “you should get rid of it?” The pro abortion crowd is demanding the death of innocent babies that weren’t even on the planet when the crime was done. And if a mom wants to keep her baby conceived in rape the world explodes.The “unhappiness” that mom speaks of is coming from the attitude of society. Let’s fix that instead of killing innocent preborn persons.

As long as rape is the excuse to murder innocent preborn babies legal abortion for all will exist. Join the rising numbers of people who are pro life without exceptions because pro life with exceptions is just pro choice to kill the unborn with fewer choices. All life matters and the rape conceived should not pay for the crime of rapists. Punish the guilty not the innocent. Stop the foundational life for abortion.

Join us FREEDOM MARCH in May to defend the lives of the innocent conceived in rape and to honor those mothers who chose life after rape.