Freedom March recognizes 50 years of abortion in the US that started with abortion in cases of rape, incest and life of the mother. In that 50 years nothing much has changed. Most pro life laws have exceptions for rape, incest and life of the mother. On Mother’s Day in 1966 while the country was celebrating the role of motherhood, legislators in Mississippi were passing a law that allowed mothers to destroy the lives of their babies in their womb. That’s pretty hard to wrap my head around. Like today the excuse of rape has caused many lives to be lost that were not conceived in rape. Such was the underlying interests of that first abortion law. The rape conceived would be the scrape goat to cover racial hatred. Mixed race babies in the womb could be terminated with a single word- rape.

In the minds of societies throughout the world rape conception has maintained the position of lowest life form. Destroying innocent mothers and children of rape conception either physically or emotionally has been the norm for more years that we can count. Mothers who choose to love children like myself conceived in gang rape almost always are called liars for loving such us. They label us as “demon seeds” or “devil spawns” or “rapists children” with no regard for the humanity and individuality each of us has apart from our biological inheritance.Why is the world so blinded with hate for the most innocent of persons? This hatred isn’t even given to the rapist! Injustice and prejudice is rarely logical.

In a recent post on Live Action News the thoughts against the rape conceived are shared by the world. Even organizations that believes capital punishment is wrong but killing rape conceived babies in the womb should be legal.
[dropshadowbox align=”none” effect=”lifted-both” width=”auto” height=”” background_color=”#ffffff” border_width=”1″ border_color=”#dddddd” ]”When it comes to the death penalty, Amnesty International doesn’t mince words: capital punishment is “the ultimate denial of human rights.” Regardless of your crime, you shouldn’t be executed for it. How about executing someone for her father’s crime? Oh yeah, Amnesty’s fine with that. Northern Ireland bans abortion in most circumstances, a fact Amnesty International wants to change. They’re especially upset about how the law protects children conceived in rape, calling it “a betrayal of women and girls.”… Rape survivor Jennifer Christie has seen her son labeled as a “rapist’s DNA deposit” and something “from Satan.” She’s been attacked as well, with online commenters calling her “stupid,” “brain damaged,” “f–ked in the head” and “an a–hole” for not killing him. One woman’s email was particularly blunt: “I want to hurt you.”[/dropshadowbox]
On May 5 mothers who chose life after rape will be honored and hailed as the heroes they are. They have endured so much. Not only the pain and suffering of the assault itself but the pain and suffering delivered by the world, friends and even family. Children conceived in rape are often tormented by society and that is the reason mothers often time remain silent. Protecting their children is number one! The Hero’s Welcome Meet and Greet gives the public a change to hear first hand from mothers in a one on one situation in a relaxed environment. Open to the public and free of charge this reception will be held at the Jackson Downtown Marriott at 7 pm the night before the Freedom March. Never before have mothers publicly received the honor due them.

So on the Mississippi state capital steps on May 6 after 50 years of abortion for rape conceived people we will gather for the Honor for Life Award Ceremony. At noon we’ll recognize these heroic moms along with heroic adoptive parents. We will rally by dispelling myths surrounding rape conception and then march for freedom for the rape conceived and our mothers. Never before has any march like this taken place. God has given us such a time as this to break free of shame that isn’t ours and boldly speak about this murderous injustice. 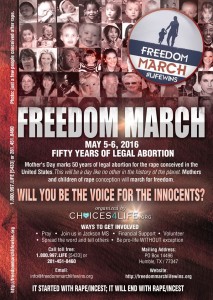 In a world that touts equal human rights there are organizations like Amnesty International perpetuating the hatred by demanding that places like Ireland succumb to shedding the blood of my peers conceived in rape. This inhumane and cruel discrimination must end and we will do our part starting with the Freedom March to bring awareness and education.

We look back on the things that Hitler and the KKK did to human beings are we are appalled. I pray one day we will look back and be appalled at what we once again did “legally” to our fellow human beings.

If you know giving the death sentence to an innocent person is wrong please march with us.  Show your support to women everywhere who find no support when they love their children conceived after rape. Your presence will speak volumes to those who watch in secret around the world. There have been many human rights movements but never for the rape conceived. Be part of the solution. Join the paradigm shift. Pray, Share. Be there! May 6, 2016 Jackson, MS Freedom March

Silence is agreement with injustice and 50 years of abortion for rape needs to end.