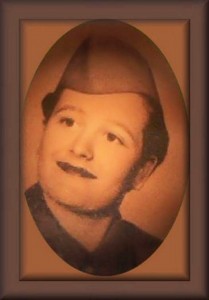 76 year old mother, Patricia Lawrence went into the Army hoping to find stability.  Little did she know that the battle would be for her own life and the life of her son. Pat joined the Women’s Army and was sent to Fort McClellan in Anniston, Alabama. An innocent double date turned into a nightmare. Hers was a blind date. That night “blind date” would take on a deeper meaning. Drugged and raped Pat was “blinded” to all that went on that night. She would remember nothing even to this day at the age of 76. Two weeks after her date she fainted. Shocked when the doctor told her she was pregnant she said, “I can’t be pregnant because I have not done anything to become pregnant.” She was discharged from the Army but the battle didn’t end there. Pat moved back with her mother who pressured her to abort her baby. She stood strong refusing to comply, choosing life after rape. Pat firmly believed it was murder and would have no part in an abortion. Her mother however was determined to get her way and destroy this rape conception.

[dropshadowbox align=”center” effect=”lifted-both” width=”auto” height=”” background_color=”#ffffff” border_width=”1″ border_color=”#dddddd” ]    Pat awoke one day to find a gun one inch from her face pointed right between her eyes. Her mother was holding the gun[/dropshadowbox]

Pat awoke one day to find a gun one inch from her face pointed right between her eyes. Her mother was holding the gun. Pushing the gun away she asked her mother, “What do you think you’re doing?” to which her mother replied, “I am trying to frighten you so much you will miscarry the child.” Pat left her mother’s home and went to stay with her sister who tried to get Pat to take a handful of pills saying, “Mom says you are to take these all at once.” Well Pat threw them in the toilet. She later discovered had she taken those pills she would have died of a massive heart attack.

Pat is not alone in the abuse she received for choosing life after rape. While many are told they are liars the pressure to abort because of rape is overwhelming. This is the real “War on Women” rarely addressed.

Pat finally found refuge with the Salvation Army working in the laundry room to pay for her stay. There were bible studies too where Pat learned about God and as she says on her website: “I saw how God had saved Paul,even though he had been such an awful sinner, so I began to think there might be hope for me as a sinner.”

She used an agency to find her son. And just over a year later she had his phone number. She asked everyone what she should do and they all said they couldn’t answer so she asked God. “It was like God slapped me on the head and said, ‘I’ve given you all this information. Call him.” And she did. Their relationship is a good one and she’s forever grateful for being able to have this son. She has 3 daughters also and now her family is complete. She says,”The thing that I want people to know is that even though I didn’t know God at the time I did know that He would make everything right.” And He has. She goes on to say, “Every life is a gift from God and to destroy that life is a crime against God!”

Pat says, “Over the years since the adoption I always prayed his life had been a good life. I prayed he knew the Lord as his Savior, I prayed for the mom and dad who raised him. My family knew about my giving the son up for adoption. So, they were understanding on his birthday knowing I would be in a bit of a reflective mood.”

Pat says that you can email her patricia.lawrence92@yahoo.com Please indicate Choices4Life in the subject line.

Patricia Lawrence loves to share God’s love with anyone who will listen. Her enthusiasm for life is contagious. Her story was featured in the radio drama Unshackled Just scroll down to find her name and the program.As a writer and poet Pat expresses her passion in words beautifully. Here’s one poem called Adoption.

I went through the labor,
But never held him in my arms,
As I gave him for adoption,
So others saw his childhood charms.
But it has always been my prayer,
That all these years he did know,
It was because I loved him,
That I had to let him go.
He has a special mother,
To care for him I’m sure,
And the love she has for him,
Is one that will endure.
Though I never held him,
Or saw his boyish smile,
I have always loved him,
And hope to see him in a while.
In a while in Heaven,
Just through the pearly gates,
When we are together,
Where our loving Savior waits.
© Patricia Lawrence