Rape Conceived – “the least of these” became very clear to me back in April 2015.  I knew I was placed in my mother’s womb not by the desire of any man or woman but only by desire of the God of the universe. My mother was raped by 8 men. No woman wants to be raped to be pregnant, though my mother loved me. Those men weren’t “family planning” and only sought to do evil. Why didn’t God stop those men if He loves us? I don’t have that answer but I do know that God is not evil. He is slow to anger and punishment. We have all done evil in His sight and He hasn’t struck us dead. I don’t know why. But what I do know is that His purpose is greater than our understanding.

I received an email from a Pastor in Colorado that changed my perspective on my life. Here’s what it said:

“I think you will find this encouraging. I found, during a study in 1 Corinthians 1:18-31 that through the Cross of Jesus, God looks at people totally different than man does.

He sees them through the Cross. This revelation is directly relevant to the work you are doing with the Rape Conceived. In verse 27 and 28 Paul says, “God has chosen the…base things of the world… the Greek word for Base is (Agenes). It means with out Kin (genos) or relatives, i.e. of UNKNOWN DESCENT or considered as illegitimate birth.

In the O.T. Law it was forbidden for illegitimate children to enter the assembly of the Lord, and for their children for 10 generations (Deut 23:2).

But, Jesus, becoming a Curse for us on the Cross (Galatians 3:13,14), absorbed that curse and punishment, and now, those who are considered ‘Base‘ in the eyes of the world, are the very chosen ones of God.”

What? I knew that verse but had never heard the Greek. So I tell my friend who speaks Greek about this amazing finding and she says,

“Juda base means worse than that. It literally means worthless illegitimate birth!”

I’m very disappointed listening to people who are church leaders or pro life leaders or government leaders saying it is acceptable to kill the rape conceived in the womb! How does Billy Graham with all his knowledge of God not understand that God is MY creator also? How is it that pro life leaders negotiate with rape conceived lives as though they were playing poker. Our lives are real lives. We are as real as any other human. Our mothers love us and their hearts break for all the hatred towards us.

To say that a rape conceived child – the least of these, must pay for a crime of a rapist is the greatest injustice. We weren’t even on the planet at the time of the crime!!

Hundreds of thousands of people March for Life in DC each year as well as in major cities around the U.S remembering Roe V Wade. But the majority of those people don’t even know that legal abortion began with the blood of my peers conceived in rape. 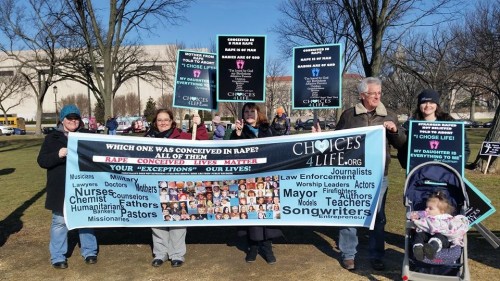 In 1959 the American Law Institute (ALI) drafted a model state abortion law to make legal abortions accessible. Mississippi became the first state to run with that model law and used it to condemn and sentence rape conceived to death in our mother’s womb. Where were the outcries? Silence enabled that cancer to grow and in 1967 Colorado, California, and North Carolina, followed MS. Then in 1968 Georgia and Maryland took blood of the innocents into their hands. Incrementally evil increased. Arkansas, Delaware, Kansas, New Mexico and Oregon joined in 1969. Again where were the outcries? Mothers cried in secret. Their voices silenced. Their children killed. In 1970 Hawaii, New York, Alaska and Washington, South Carolina and Virginia embraced the evil. Florida, in 1972, would be the last state to join the ranks of evil before the “Supreme” court of the U.S. would deem it acceptable to have abortion on demand. But even in that battle the rape conceived was the target.

As long as the rape conceived are not considered worthy of protection all preborn are at risk. One has only to say they are raped to kill the baby. It started with rape in MS. and it will end when rape is no longer an excuse to kill an innocent baby. Large numbers of rape conceived and mothers are coming out of the shame and speaking out like never before in the history of the planet. God is doing something big. He is removing the shame upon those He has chosen. He has chosen me, rape conceived- the least of these, to call out to those who are lost, hurting, and being destroyed by lies. I also say “Shame on you” to those who want rape conceived to be killed in so called “pro life” laws.

There are many people who once had no understanding of the reality of the rape conceived preborn and are now fighting alongside us. There are no words to adequately thank them. Georgia Right to Life was ousted by National Right to Life because they refused to have exceptions to kill rape conceived in the laws NRTL promotes. NRTL brags about being the oldest and largest “prolife” organization but they are just pro choice with fewer choices. Anyone who can say it’s ok to kill any baby in the womb is not pro life!

The rape conceived are the least of these for sure and the most worthless and illegitimate in the eyes of entire world!  None are more despised. The rapists are not even despised like the children conceived from rape. Our mothers are also hit with hatred from the world for loving us.

But God is in our purpose. I remember hearing Him tell me “I placed you in the camp of the enemy to glorify My Name!”  Wow what an honor! But like others that God has singled out it does not come easy. Joseph in the bible in Genesis 37 tells of a dream he had. But the brothers were insulted by the dream and “hated him all the more.” I’ve been saying “Shame on you” to people who are determined to pass laws that allow for the sacrificial killing of the rape conceived not even knowing I was fulfilling 1 Corinthians 1:28. People…the flesh doesn’t want to be corrected. I know that correction is good. Imagine going the wrong way trying to get to your business meeting. Others know you are on the wrong road but never tell you and you end up hundreds of miles away …LOST. Is is loving not to tell people they are are no the wrong road? No it is not.

I love that hearts are opening up to the truth.  On May 6, 2016 we will gather in Jackson, MS to recognize 50 years of legal abortion against the rape conceived in the U.S. The exact anniversary lands on Mother’s Day. Ironic? I don’t think so. Fifty years with the Lord is restoration.We will be marching for freedom at Freedom March Life Wins. We will honor hero moms who chose life against society’s death wish for their children conceived in rape.Never before have the rape conceived stood in such numbers to declare our humanity. We will march to break the curse placed on us by the world. We want the world to see our humanity and the love of our mothers. The abuse and discrimination must stop. We will start where abortion began in MS. Will you join us – the least of these?
If you’re a  mother who chose life after rape we want to honor you.