The horror of rape is bad enough. Society rails at the injustice of such a ravaging offense. But rarely does anyone consider the equally ravaging offense of taking a child conceived in rape from her mother. Such is the case of Mari in New Hampshire. 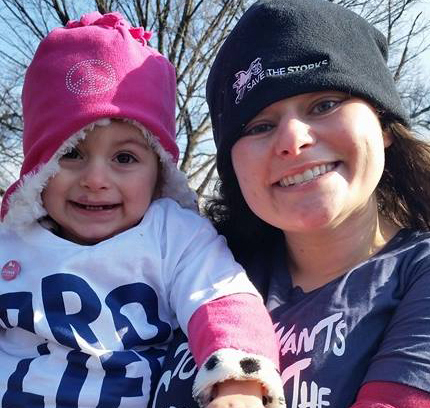 Mari contacted CHOICES4LIFE two years ago for emotional and financial support. She explained that when she had become pregnant after rape 1. her family didn’t believe her and 2. they wanted her to abort. Mari refused. This baby was hers not the rapist’s and she was going to give birth and raise her daughter. Like most who see the baby after birth the family fell in love with her as her mother has loved her from the beginning. Sadly her family for some reason didn’t want Mari to have her daughter and worked towards taking the daughter from her.

A year ago Mari was physically attacked by a family member and that person called the police. Mari for fear of losing her daughter panicked and plead guilty. She was in such distress over threats of losing her daughter that she was suicidal. She called me right before going to the hospital. There were witnesses that Mari had been the victim and not the attacker but Mari remained in fear and did not fight. CHOICES4LIFE offered to relocate Mari at the time when the issue had settled. Mari had not lost her daughter and she felt that she should stay near her family and work things out. “They’re my family,” she said and opted not to move.

A few months ago Mari called in panic. Mari’s mother had taken the daughter. It happened that Mari slipped and fell hitting her head. She was rushed to the hospital to find she had bleeding on the brain. Mari’s mother was taking care of her granddaughter while Mari was in the hospital. When Mari was being discharged her mother insisted that she be transferred to a mental hospital. The doctors insisted there was nothing wrong with her and that would not be necessary. Mari’s mother persisted and Mari was transferred to a mental hospital for evaluation. She spent two weeks there.

Upon discharge Mari called her mother. The mother informed her daughter that if she came near her daughter or their home Mari would be arrested. Mari called me crying and panicked thinking her mother had succeeded in finally taking her precious gift from her. Mari learned from the courts that Mari’s mother was given custody of the little girl. Mari’s mother took the opportunity to say Mari was in a mental institution and a drug addict and alcoholic hoping to make a case against the daughter to secure the granddaughter. The judge without investigation awarded custody to the grandmother. The same family who wanted an abortion after rape now has taken this 2 year old from her mother.

CHOICES4LIFE suggested a lawyer for Mari. Upon hearing the situation the lawyer felt very confident that no judge would award custody to the grandmother and Mari had nothing to worry about. So Mari opted to represent herself. Mari went to the court showing paperwork confirming she was not an alcoholic, drug addict or a mental patient.  She was not given respect with her mother constantly interrupting  as she tried to speak to the judge. The judge did tell her to be quiet but she did not and the judge did nothing to stop her. This female judge did not rely on doctor’s, Child Protective Services, and CHOICES4LIFE’s affirmation that Mari is a capable mother without the problems described by her mother. The judge then requested a state appointed guardian to oversee the case and put another hearing  four months away.

The court relented to “joint” custody and the grandmother was to relinquish the child two to three times a week to the mother.  But the mother in the week before the hearing was in contempt of court not allowing Mari to see her daughter for that whole week. A hearing was approaching within days so Mari didn’t make waves.On the morning of the court hearing she received a voice message supposedly from the state guardian saying the hearing was cancelled. No rescheduling had been made.

Mari was sick that day and was on her way to the doctor when she decided to stop in at the courthouse to file a motion against her mother. There she learned that the hearing was not cancelled and was going on as scheduled in 30 minutes! She was unprepared without documents. All she had was the voice message on her phone.The judge refused to hear it. When Mari tried to say her mother was in contempt, the judge turned on Mari and gave full custody to the grandmother. The grandmother said she was told it was cancelled also. But surprisingly the grandmother just so happened to be there. She said she came “just in case.”  There is something very wrong with this whole situation.

In this case Child Protective Services has vouched for Mari on two occasions as being a fit mother.(Very rare indeed) But the judge demanded that CPS once again go to Mari’s home and evaluate her again. Mari’s mother reported Mari to the Disability Office months ago and her disability benefits were stopped. There is no reason for this to happen as Mair’s disability benefits are separate from her parenting. The benefits are not for the child yet Mari is being threatened with eviction for lack of payment for 3 months. She kept hoping she would have this resolved long before now. This is yet another situation to work against Mari getting her daughter back. Where is the justice?

Our society has long condemned mothers who love their rape conceived children. What most of the public is not aware of is the prejudice children and mothers. Mari’s is not an isolated story. Too many times they are called liars for loving that child conceived in rape and many punished. This is an issue that needs to be brought to light. This is the real war on women and children that is rarely discussed openly.

Something is desperately wrong in this little town of Concord, New Hampshire. Mari has no money to pay for the kind of legal representation she needs to get her daughter back. We are making a cry for help for this mom who has endured so much and all she wants is to love and care for the love of her life. She was raped and the only good that came of it was her precious daughter. Will you help her get her daughter back?

“I feel like my soul is being sucked out of me,” Mari said crying.

ALL funds designated “Mari” will be used toward getting her daughter back and helping her sustain until that time. DONATE