On the topic of rapist’s parental rights

If you have not been raped, you cannot imagine the damage it does to a person. I felt so disgusting, like I would never be clean again. I felt as though every woman could tell and looked down on me, and every man wanted his turn. When I reported my rape and the only doctor available was male, they had to hold me down for the examination.

I couldn’t stand to be out in public. It’s been 12 years, and I still cannot have a male doctor or dentist. I sometimes panic if a male comes up behind me. If I am at a restaurant, I cannot have a male seated behind me. I still have nightmares. Before you ask, yes, I have been to therapy. Believe it or not, I have improved.

After a person is raped, they must face their rapist in court. I protested this strongly, but my lawyers insisted that the law states that a person has a right to confront their accuser. I had to see my rapist again. I had to stand in front of him and live my rape again, right in front of him. I had to describe every detail, and I was mocked by his lawyers if I slipped up at all. I was called a liar and other names. I was actually told that since I was a virgin before it happened, I was unaware of how sex was supposed to be, and I must have misinterpreted it.

I then had to sit there as my rapist got up and told his version. He spun his lies, and I had to remain silent. I went to court alone; I left alone. I waited for days for the verdict, wondering what would happen. The verdict came: Not guilty.

Try to imagine living with this. Try to imagine knowing your rapist is back in your neighborhood, your church, talking to your friends, free to do it again to whomever he wants, even you. Imagine the fear.

Now, imagine that you just found out that this monster not only raped you, but he got you pregnant.

Personally, I fought with many thoughts. Suicide, abortion, what if he looks like him, acts like him? What should I do?

In Iowa, 50% of babies conceived in rape are aborted. Half. Do you have family members? Imagine half of them, gone, because someone didn’t like who the father was. Which half would you pick?

In the end, I decided to keep my child. I didn’t know that the majority of states allow the rapist to have parental rights.

Yes, you read that correctly.

Not only did I have to go through all of the above, but I then had to fight for my child. My child, my precious baby, could have been taken by this evil man. What if my child was a girl? Would he rape her, too? How long would he wait until he started? What would become of her?

I was very thankful that my baby was a boy, but the battle was still there. I had to repeatedly go and face my rapist alone. I had to walk to and from the courthouse, wondering if he was hiding, waiting to pounce on me, wondering if I would bump into him in a hall. Every single time, I could not refer to the rape as an excuse for him to not gain custody, since he had been found not guilty. It made the fight last that much longer. It made the fight for my son last for almost two years, costing me thousands of dollars in court and lawyer fees.

He didn’t even want my son. It was just a way to hold power over me. When he got bored, he simply stopped showing up in court. Even then, I had to come again and again, not knowing if he would be there, not knowing if this was the day I would lose my child. Thankfully, his refusal to show up meant he lost his rights, but some women aren’t so lucky.

My best friend lived in Missouri. She was married, until he decided sex wasn’t good enough; it had to be rape. She, like me, ended up pregnant. She took her child and fled to safety. Unlike me, she had her child taken from her. Her rapist, her abuser, has her son, and she is allowed to see him only twice a year.

TWICE A YEAR. Rapist’s parental rights shouldn’t be words we even have to speak.

She missed his first day of school. His first loose tooth. His birthdays. Holidays. All of it, taken from her. All of it, given to her rapist.

This is her son. 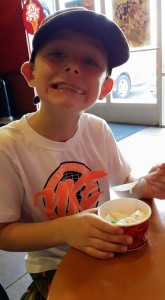 It is no wonder she battles with depression and thoughts of suicide. She got to see him last Christmas and is worried that he is being abused. Only now, with the first court battle and being forced to pay child support, she was deeply in debt and couldn’t afford another battle. Having already been deemed a liar by the courts, she feared another loss. Still, she tried to report it. She was met with failure, again. She was told that she shouldn’t try to raise a stink. Stop being a child. He won, you lost; get over it. If you persist, you will lose your son forever.

This is happening, right now. Right now, as you read this, real people, like you, are being raped, getting pregnant, and losing their children to “rapist’s parental rights.” In almost every state, it’s perfectly legal.

The wonderful state of Iowa just passed a bill to remove parental rights from rapists! While it has only passed in the House so far, this is a huge step forward. If you can show that you were raped, your rapist cannot gain rights to your child. While this would not have helped in my personal situation, imagine how many lives this will impact! How many babies will get to live, since the mother won’t have to worry about her rapist obtaining the baby? How many families will be able to live a fairly normal life, not wondering if their child is okay, or seeing the bruises but being forced to remain silent? How many children won’t get abused by the person who forced their being into existence?

This bill could change everything for so many lives. It is only a step, though. Still, in more than half of the United States, it is still legal for a rapist to gain rights to the child. Do not sit and let this happen. Write letters, email, make phone calls! Show them what Iowa is doing. Make them look at the families impacted by the lack of this law. We can make a change. We can save lives.

I’m reminded of the horrible story of Kitty Genovese. In 1964 a woman cried out for when she was attacked and stabbed. Someone only yelled at the man from above in an apartment building. The attacker left but came back two more times soon after each attempt to kill her had failed. Thirty seven saw and heard her screams that she was stabbed and dying, but not one so much as called the police until after she was dead. They all just watched as Kitty was being stabbed to death in broad daylight. “I didn’t want to get in­volved,” a man sheepishly told the police. O course we must all fear evil men. But there is another kind of evil which we must fear most, and that is the indifference of good men.

“For evil men to accomplish their purpose it is only necessary that good men should do nothing.”

Sara Gerardo is married now mother of three, writes for CHOICES4LIFE.org and deeply loves her son conceived in rape.