Right on the heels of celebrating Peru’s decision to keep abortion illegal in ALL cases, Ireland decides to do the opposite. In what is being called a “human rights” move (because evidently babies aren’t humans if they’ve been conceived in rape),Northern Ireland has decided that “near-total ban on abortions ‘breaches’ the human rights of citizens because it doesn’t contain exceptions for victims of incest and rape and those carrying fetuses with fatal abnormalities.”

I wish people could understand. Ireland just decided to start skiing down the slope. Once you allow some abortions, you’ll allow more, and then all. Once you devalue human life, you don’t stop. Next you’ll be one of the people who think we should kill the disabled and the elderly because they’re a drain on our resources. Maybe you’ll be like China and think that people should only be allowed a certain number of children and the rest should be killed. When does it stop?

I’m sharing a picture below. One of these children was conceived through rape. Please, tell me. Which one of my children deserves to die? Is it the scientist who is going to go to space? Is it the brilliant engineer? Or the adorable little dancer? Which life is worth less because of the way that child was conceived? 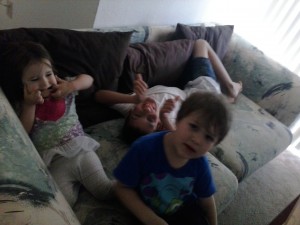