If rape pregnancy is rare why were 29 rescued girls all pregnant? Yes all 29 girls were pregnant. The ages were very young to 17 yrs of age.

Wikipedia writes, “The false belief that pregnancy can almost never result from rape was widespread for centuries. In Europe, from medieval times well into the 18th century a man could use a woman’s pregnancy as a legal defense to “prove” that he could not have raped her, since her pregnancy was thought to mean that she had enjoyed the sex and, therefore, consented to it.”

So can the idea that women “wanted” it still be the reason that females are rarely believed when they report being raped?

It’s still widely believed that rape related pregnancy, RRP, is rare but back in 1998 The Journal of Obstetric and Gynecologic and National Nursing, JOGNN had a very interesting report, “Care of pregnant women has long been the focus of women’s health nursing, and violence against women has emerged recently as a major concern of the profession. Still, the intersection of these phenomena—the care of women who are pregnant as a result of violence—remains largely unexplored and unaddressed. The incidence of pregnancy resulting from rape is likely greater than generally recognized…”

So why are we still fighting the archaic idea of rarity in 2019?

The world will know nothing of the rescue because the girls are minors who have been threatened by their captors.  They will be kept in the safest of places so no one will have the opportunity to harm them again. Society will probably go on believing the myth that pregnancy from rape is “rare.”  In reality the only thing “rare” is that the females are willing to talk about it. I am grateful that more and more are becoming bold enough to speak out as they grow stronger and older.

Most of the girls I’ve spoken with after rape want their baby. One 14 year old who was rescued was suicidal until she learned she was pregnant. Sadly the baby was still born at 24 weeks. I was very concerned for her but she was very strong assuring me, “I’ve got peace.” A funeral for the baby gave her closure.

These rescued girls were heavily drugged by their captors. They are going through horrible withdrawals. However, they are all aware of the life growing inside them. Another 14 year old will only ever have one child. She knows how precious life is. This pregnancy is indeed a miracle because doctors can’t understand why the girl didn’t bleed to death at the time of the rape. The severity of damage is beyond repairable. It really looks impossible for her to have become pregnant or carry for that long. The hospital tried for 3 weeks to delay delivery but couldn’t stop the baby from being born at 26 weeks. Currently the baby is doing well in NICU.

The mother however has already had heart surgery and will have to undergo a complete hysterectomy because of the damage. Her heart and lungs were so damaged from drugs forced on her that she is now on the list for a double lung transplant. She is praying her baby will live and this is another mother at peace with her own life situation. Society can’t wrap their head around the idea that a mother who has endured so much torture can separate the rape from her baby. Not only does she separate the two she sees her child as the only good that could ever come of such violent evil.

Two very young victims delivered via C section on the day they were rescued. Both had twins! Many believe that very young are unable to stay pregnant and certainly wouldn’t believe they could give birth to healthy twins. 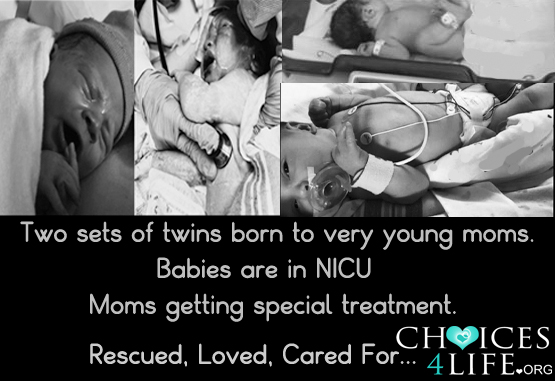 There are 133 who are currently receiving help from CHOICES4LIFE. Sixty two from the end of 2017 and January 2018 are now thriving with healthy happy babies. Not sounding rare to me at all.  All of the girls found on the street were pregnant. What kind of statistics can we derive from that? I don’t know but I do know it’s nothing even close to what has been stated in previous reports. “A 1987 study also found a 5% pregnancy rate from rape among 18- to 24-year-old college students in the US.[13] A 2005 study placed the rape-related pregnancy rate at around 3–5%” according to Wikipedia. But if the victims aren’t reporting how is it that anyone can get a true percentage?

CHOICES4LIFE isn’t a large organization yet we’ve helped hundreds and know hundreds more. Based on my dealings with those pregnant after rape there are countless more giving birth after rape than anyone wants to admit. I know women who have never told anyone but me. They know I will protect their secret. One woman said she hadn’t even told her parents almost grown son.

I recently saw a post on Facebook. A woman has traced her ancestry back to a 15 year old who had been raped and refused to end the pregnancy as her midwife had wanted. She gave birth to a baby boy in the 1800s. How many more people are walking around today completely unaware of a rape conceived pregnancy that resulted in their own chance at life?

Our rescued girls risked everything to save their babies. Not one of them has any regret for doing so. If they dared to make a post on Facebook about their love for their child they probably would be told “they might have enjoyed the rape.” It’s happened so many times when I’ve personally posted stories.  Here’s one.

What can you do to help? You can share this article and website. Dispel the myths when you hear them and direct people to CHOICES4LIFE.  Most of all become our partner to support victims. The need is great and ongoing. You can donate here to save both the lives of mothers and their babies.